The Laws of Scale

Geoffrey West’s latest book Scaling looks at system behavior in an attempt to answer every scale-up CEOs question: “How to scale a business?”.

He studies organisms, cities and companies, whose behavior emerges from continuous iteration of often very simple rules operating between individual agents. These systems are often significantly different from the sum of the parts and seem to take on a life of its own. This is called emergent behavior.

Even if we understood how the individual constituents interact with each other, predicting the behavior of the whole is usually not possible. In this respect companies are not pure complex systems- there is some sense of overall design, direction or enterprise, while at the same time the individual employees, customers and other actors do “their own thing” from which the whole emerges. The book zooms in on scaling – Scaling refers to what happens to a system if its size is increased.

Scaling is represented mathematically by simple power curves: y=a xc , with “a” being a constant “y” being the dependent variable, “x” being the size of the system and “c” the scaling exponent. When one draws these power curves logarithmically, meaning that the scales on both axes increase by successive factors of ten, one gets a straight line with the scaling exponent being the coe”cient (after all log y= log (xc )=c log x).

West presents Compustat data of all 28,853 companies that were traded on US markets in the sixty years between 1950 and 2009, which results in the following amazing power curve: 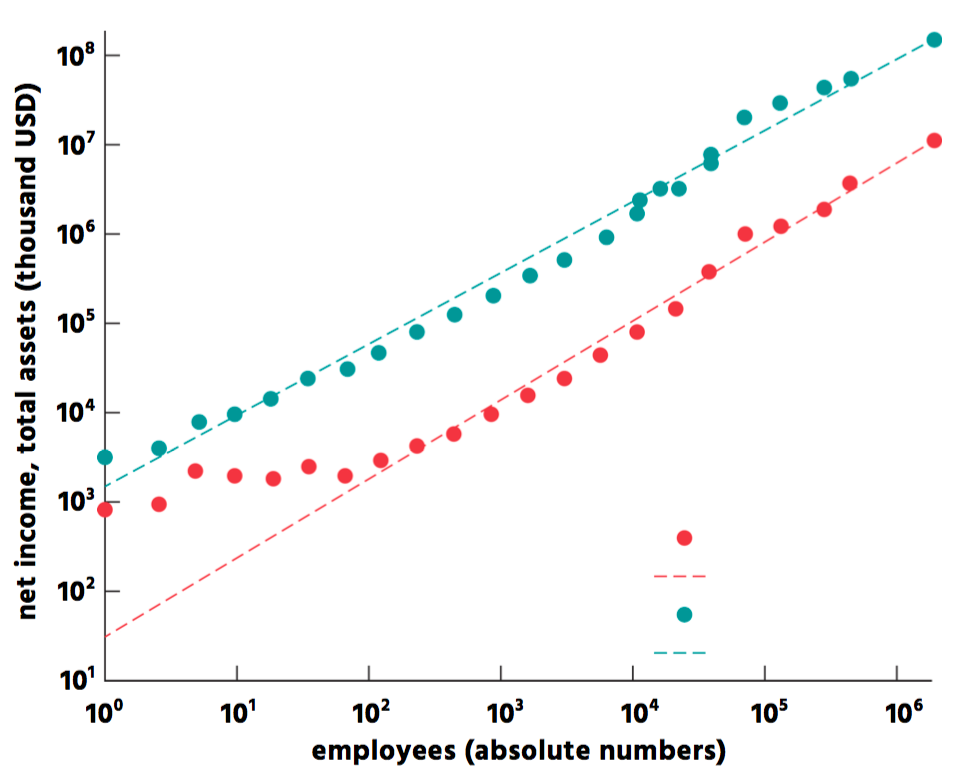 Let’s zoom in on the blue dot points (net income) and first look at the dot points to the right of 102 employees, i.e. companies with more than 100 employees. Note that the x-as ranges all the way to 106 employees, i.e. companies with a million employees, so a huge range of scale. The vertical axis presents net income, i.e. the net profit of the company calculated by taking revenues and subtracting all costs, depreciation, interest and tax. The exponent equals 0.79, which means that as the company increases in number of employees by a factor 10 the net income increases only by a factor 10 0.79 which is approximately a factor 6. This is quite disappointing as you would expect large companies to reap benefits of scale, resulting in higher, not lower profitability per employee.

In the book, Geoffrey provides power curves for sales, gross profit and net income. Gross profit is defined as sales minus cost of sales (the sum of cost of direct material, direct labour and factory overhead). Net income is defined a gross profit minus SG&ADIT (the cost of sales, general and administration, depreciation and amortization, interest and tax). Using data from Stern University of the average gross profit margin and the net income margin as a percentage of sales, one can also calculate the power exponent of Cost of Sales and of SG&ADIT: Geoffrey concludes: “the sublinear scaling suggests that companies also eventually stop growing and ultimately die”, drawing the analogy with organisms and the implications of sublinear scaling for their mortality.

I would propose an alternative analogy with different implications: that of animals of prey. Very few animals of prey die of old age, and instead most die because they get eaten while in some occasions suddenly many perish because of harsh external conditions, e.g., famine.
Similarly, companies rarely cease to exist because of obsolete equipment or skills while their market is still thriving – in these cases it always makes sense to invest in renewal. Most cease to exist because they are being acquired or because the market “turns again them” – the consequence of worsening market conditions, changing customer needs, technology disruption or competitor’s inroads. As a result, there is not a particular age for companies at which time they typically die. The risk of a company dying does not depend on its age or size. It remains a constant struggle for survival.

Scaling refers to what happens to a system if its size is increased. Scaling also means growing in scale. Individual animals do not scale; after a rapid development phase to maturity they remain of mostly constant size for all of their live. Groups of organisms, like herds or coral reefs, however, can grow in scale and so can cities and companies.

Like trees trying to reach the canopy, companies want to scale in size because they are incentivized to do so. Companies who scale provide more customers the benefit of their products and services. Also, companies that scale find it easier to attract investment and talent. And growth drives the share price to which the remuneration of top management is often linked.

Why do cities experience open ended growth, while the growth of companies eventually stalls?It is not because cities are more social, unruly places, or have less top down planning. Geo!rey west point outs that the di!erence is that the output of cities (their social- economic capital) scales superlinear, whereas the output of companies (their sales) scales sublinear. My explanation for this is: fierce price competition between firms which keeps forcing their sales back to the level of their costs. Cities compete for resources, but do not force each other’s output down to marginal cost levels. If enterprises have no price competition on their output – like for instance publically funded universities or the church– their growth might be open ended. Note that both examples are not known for their unruliness, or lack of top down planning, and still have been scaling for centuries.

”Employees are attracted to companies because of the mission, position and performance of the company, because of the opportunity to do attractive and meaningful work, to get opportunities, to learn, to have freedom and control, to work with nice colleagues and to get an attractive remuneration. For companies the sublinear scaling of their net income impedes their growth. As the corporation adds more and more people, the resulting additional sales generate less and less additional net income. They operate in competitive markets where additional sales are typically contested, also when the overall market grows. At a certain moment, the company just runs out of profit generating growth opportunities. The petering out of growth when companies become large also can be explained by seeing a company as a self-organized system. Companies scale when more employees start working there. Employees are attracted to companies because of the mission, position and
performance of the company, because of the opportunity to do attractive and meaningful work, to get opportunities, to learn, to have freedom and control, to work with nice colleagues and to get an attractive remuneration. Large companies score lower on these than smaller companies. Reasons often quoted why most large companies fail at job satisfaction: too much bureaucracy, too much rigor, lack of innovation, no career development, too risk averse, management problems (the Peter principle), bad people aren’t fired, frequent, unproductive meetings, and feeling like a small cog in a big machine.

Small companies grow faster than large ones. Still to move up the scale from a small firm to a large one is truly against the odds. Research at THNK conducted together with Deloitte showed that the chances of a new enterprise to ascend as a scale- up (a company that grows above $10 million by its 5th year of revenue) are around 0.5%. And as Geo!rey West states: “After growing rapidly in their youth, almost all companies with sales over about $10 million end up floating”.

As the average sales per employee in the US amounts to approximately $200k, sales of $10 million equals an organization of approximately 50 people employed. The power curve presented at the beginning of the article and shown here again marks this size of organization as a transition point below which the (blue) curve of net income versus number of employees is almost flat, while above it the curve is almost linear. This implies that below this transition point costs grow much faster than sales, while above it both scale more or less at the same rate.

The transition point could be marked as a stepping up of sales productivity. Stepping up sale productivity means that the organization sees new higher value-added opportunities by adding additional employees. In our recent survey among young innovative enterprises (all less than 10 years old), we found that those that grow beyond this transition point are significantly more new opportunity oriented and keep launching new products, while does who stall are much more performance (e”ciency) oriented and focus on existing product o!ering.

Meet the Board Member: Ronald Hobma

Building Trust within a Scaleup Board, with Steven van Houwelingen

Meet the Board Member: Joris Tinbergen