Ready to curl up near the fire and increase your learning velocity? Merry Christmas and Happy New Year from ScaleUpNation. Looking forward to an enlightening 2019, full of growth. Please find below our Christmas gift to you: the top scale-up relevant reads of 2018.

Skin in the Game by Nassim Nicholas Taleb – Best Reads #1 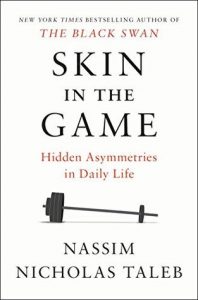 Can you make significant change in the world without putting some skin in the game? No radical innovation happens without an inspiring leader, and these are often the ones that shoulder the biggest risks.

Nicholas Nassim Taleb, the economist-turned-philosopher, released a new book this year. In it, he challenges the hypocrisy of advising, selling, or participating in any endeavour without being directly involved. Some would say that only the people that have a personal stake in an outcome should be heeded or trusted. Especially if they also partake in the consequences. Take the example of a cobbler who you don’t pay upfront. He will repair your shoes knowing that if he screws up, you will not pay him. In a more brutal and honorable past, men were executed if the building they had constructed fell down.

But what if we expect our agents of change to take serious risk? Take a scenario where an army general devises a high-risk strategy that could significantly shorten the war, but it ends in disaster. Having cost so many young lives, should we punish him? If a political leader’s innovative policies proved highly counter-productive, should they be sued? Does an entrepreneur that wants to bring a new medicine to the market, fails and goes bankrupt, deserve to lose his life’s savings?

Ideally, the potential personal loss should be aligned with the amount of risk we want the change agent to take. For mission-driven entrepreneurs the consequences of putting our skin in the game should not be career ending or resulting in personal bankruptcy. If that were the case, we would act too conservatively. We want to remember heroes for their attempts, not just their results.

“If you don’t take risks for your opinions, you are nothing. People want to have their soul in the game.” 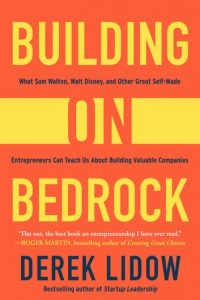 More than 30% of the USA population is involved with entrepreneurship. Either by having been or currently being engaged in it themselves, or by being related to someone in entrepreneurship. Some economists argue that we are all entrepreneurs, so long as we can make decisions for ourselves. Decisions like for whom will we work, what will we buy, how do we spend our time? All of it is entrepreneurial, and is recognized as such.

In this book, the author and Princeton professor Derek Lidow asks whether you are ready to be an entrepreneur. Additionally, he asks if it is the right thing for you. It asks you to explore your skills as a founder, co-founder, investor. It answers the who, what, when, where, how, how much, and why of founding. He divides entrepreneurs in two separate groups. The first is the high-risk entrepreneurs, helped by VCs to create fast-growing companies. The second is bedrock entrepreneurs, who act with patience, low-risk and build a company with steady vision. It explores motivations, creativity, balancing life with entrepreneurship, and whether or not this is the path for you. The final, daunting statistic? 70% of those who actually become full-time entrepreneurs abandon their efforts within a year. Either that or they do not make their money back whatsoever, losing time and risking relationships.

“Contrary to popular opinion, ideas cannot generate a passion required to lead successful and self-sustaining companies – not even great ideas. Passion for an idea, inevitably, fades when you realize customers want something different, or during the hardships to making it happen. Setting up a company is easy, but growing it into something valuable and self-sustaining is extremely hard.” 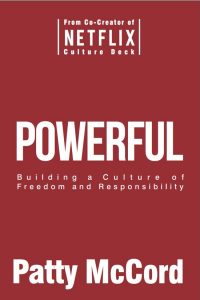 Netflix chief talent office Patty McCord writes the book on how to build a strong culture. In her book, subtitled Building a Culture of Freedom and Responsibility, she outlines how a world-renowned company like Netflix was able to develop and restructure its team as it evolved. The company notoriously went from mail-order DVDs to leading streaming platform, now to an entertainment empire.

The most important takeaway from Powerful is to abandon the idea that the people with whom we work are family. In fact, they are a team. Like all teams, changes and rotations to the roster are crucial to the success. This can happen at the cost of trusted and loyal employees, or preferred ways of working. While weaving stories of culture building using discipline, self-efficacy, trust and freedom, a company’s culture begins to form thanks to “stunning colleagues with excellent skills”. As business grows, bring in high-performing people and minimize rules, McCord advises. An outstanding team and culture can solve almost any challenge together, while ensuring the best chance of success for the mission and dream at a given stage.

“Just as great sports teams are constantly scouting for new players and culling others from their lineups, our team leaders would need to continually look for talent and reconfigure team makeup. We set the mandate that their decisions about whom to bring in and who might have to go must be made purely on the basis of the performance their teams needed to produce in order for the company to succeed.”

To get more recommendations and scaling updates, make sure to subscribe to our newsletter.